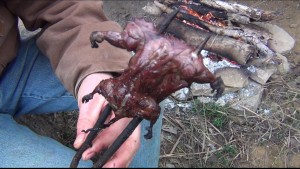 The most common mistake I encounter come from those weekend-warrior types that fancy themselves as hunters. Toted are the claims of being able to live off the land with a rifle and taking large game when in need... There are two reasons that this claim misses the mark. First, the likelihood of being thrust into a survival situation while being armed with a hunting rifle and adequate ammo is unlikely at best. Second, if the survival situation is that of societal collapse(apocalypse), large game will be hunted to near extinction within weeks by millions of like-minded potentially starving individuals.

In almost any survival situation, the go-to meat source will be small creatures: squirrel, rabbit, chipmunk, gopher, dove, waterfowl, snakes, fish, beaver, armadillo, frogs, mice, opossum, clams/mussels, raccoon, and a host of insects. Basically, any living animal that can be collected and consumed in quantity will do. Chances are, any given plot of land will be populated with a higher population density of small creatures than those of the mega fauna: deer, hogs, javelina, turkey, antelope, elk, moose, etc.

Initial reactions to the thought of eating some of these will likely intimidate some. Regardless, the main topic of this thread will be on how to best go about procuring such creatures. Give yourself some time to think over the concept, putting yourself in a situation where starvation begins to set in can be a perspective changing event.
Ah yes, and the photo above is cooked pocket gopher... which was delicious.